Do You Suppose The Plastic Clothes Are Removable?

I was once required to remove my “jacket,” which was also my shirt (think Chanel style business suit) and send it through the X-ray machine on an airport security line. This required that I walk through the very public metal detector wearing only a bra. After I got through, I asked to speak with a supervisor. Who apologized, but then demanded to see my suitcase, which he searched so thoroughly (and repacked by wadding my clothing into balls) that I almost missed my flight. I guess I could purchase one of these sets and re-enact that. But I probably won’t. 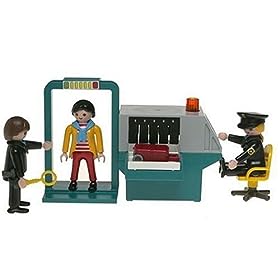 Product Description From the Manufacturer

The woman traveler stops by the security checkpoint. After placing her luggage on the screening machine, the airport employee checks her baggage. The traveler hands her spare change and watch to the security guard and proceeds through the metal detector. With no time to spare, she picks up her luggage and hurries to board her flight!

Here are some excerpts from the Customer Reviews:

At first it looked as though my Playmobil terrorist cell was going have trouble getting through this security system – no naked flames, sharp objects, guns or bombs. Then I bought the Tobacco Lobbyist upgrade pack which allowed cigarette lighters to be carried through so they simply torched the plane instead. Hours of fun for all the family.

I was a little disappointed when I first bought this item, because the functionality is limited. My 5 year old son pointed out that the passenger’s shoes cannot be removed. Then, we placed a deadly fingernail file underneath the passenger’s scarf, and neither the detector doorway nor the security wand picked it up. My son said “that’s the worst security ever!”. But it turned out to be okay, because when the passenger got on the Playmobil B757 and tried to hijack it, she was mobbed by a couple of other heroic passengers, who only sustained minor injuries in the scuffle, which were treated at the Playmobil Hospital.

While I’m sure your child will love this do we really want to reveal our security secrets to the terrorists? I bet al-Qaeda is training the next generation with this very product. I am saddened to learn that Playmobile hates America.

… since the playmobil Dad could not remove his shoes or other clothing items, unlike the Barbie, the playmobil security agent became suspicious and after waving her wand wildy a few dozen times, called her supervisor to wisk the Dad into a special body-cavity search room, (which incidentally led to quite an embarasing and interesting discussion with my twin daughters about personal hygiene and a slight adjustment to the rules we had them memorize about touching by strangers). But worst of all, since the suitcase did not actually open, the baggage inspector made a call to the FBI and ATF bomb squads which then segregated the family’s suitcase (which btw was the only suitcase they provided for our educational family experience) and according to the advanced TSA regulations, had to blow it up, (since they could not otherwise mutilate the luggage, break off the locks and put one of those nice little advisory stickers on it), which we had to simulate out in the backyard with a few M-80s and other fireworks.

0 Responses to Do You Suppose The Plastic Clothes Are Removable?