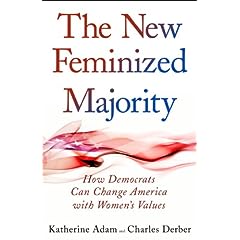 From the FLP mailbox, at their request, a guest post by the authors:

By Katherine Adam and Charles Derber

As Democrats come closer to choosing their candidate for the 2008 presidential election, gender has emerged again and again as the defining element of the primary race. Hillary has relied heavily on a base of older and working class women. Barack Obama has pulled ahead of Hillary Clinton with a feminized personal style and using feminized language about unity and community.

New York Times columnist Maureen Dowd picked up on this phenomenon, writing, “The first serious female candidate for president was rejected by voters drawn to the more feminine management style of her male rival.” Boston Globe writer Ellen Goodman has a different take on the events: “Now we see a woman running as the fighter and a man modeling a ‘woman’s way’ of leading. We see a younger generation in particular inspired by ideas nurtured by women, as long as they are delivered in a baritone. So, has the women’s movement made life easier? For another man?”

Dowd and Goodman both touch upon a theme we discuss in our book, The New Feminized Majority: How Democrats Can Change America with Women’s Values. The Obama-Clinton gender battle ultimately comes down to feminized values, which will also be the defining element in the 2008 election and beyond.

For many Democrats, it seems strange to talk about values-based politics. We usually equate values with religion. The media calls evangelical conservatives the only”values voters.”Yet, values are nothing more than socially constructed ideals of how the world should be. Many aspects of a person’s identity beyond religion create his or her value system â€“age, race, and nationality. However, the most important values for Democrats to understand are values shaped by gender.

Women’s history of oppression, combined with their fights for liberation, have created what we term feminized values. These include empathy, cooperation, and a preference for non-violent solutions to conflicts. Conversely, men’s history of political and economic dominance socialize men into a system of masculinized values, including aggression and individualism.

Gender gap data from surveys consistently show this gendered difference. But it is important to understand that gendered values are not embedded in a person’s DNA. Women are not inherently more peaceful and nurturing, men are not born as cutthroat, “every man for himself” individualists. (Just look at Condoleezza Rice and Dennis Kucinich.) People, in general, are socialized into values based on gender, but gender is open to variance and change. Men can adopt feminized values, and, as we will show, millions have.

Women’s increasing progressivism won’t lead to a battle of the sexes showdown. In fact, millions of men are following the feminized progressive example, holding opinions on issues that match those held by a majority of women. This points to the reason Obama or Clinton needs to pay close attention to gendered values: for the first time, feminized values:which are progressive, community-minded, and often closely aligned with Democratic Party policy:are now held by a majority of Americans.

While gender gaps still exist, a large enough minority of men support feminized principles to make them majoritarian. We find these values reflected in issue after issue, in poll after poll. From ending the Iraq War to funding stem cell research, from raising the minimum wage to adopting government-sponsored universal healthcare, the feminized position is the majoritarian position:which means it is the winning position.

While Clinton seemed to be the more “masculinized” candidate in the Democratic race, the differences between Clinton and Obama will seem microscopic once we enter the general election. The race between McCain and the Democratic candidate shows a HUGE chasm between feminized and masculinized morality.

McCain’s hypermilitarized foreign policy objectives and traditionalist social policies reflect his masculinized values. At events, he is often flanked by symbols of American masculinity, such as cops and soldiers. These visuals are an attempt to convey a subliminal promise of masculine protectionism: vote for me and men like these will keep your wives and children safe. The other unspoken part of this message is clear: Democrats are too weak and womanly to lead.

Unfortunately for McCain, a majority of Americans have turned away from this dated definition of “strength”. With hundreds of thousands dying in Iraq, GIs returning home paralyzed or in body bags, and pictures circulating of hooded Iraqi prisoners with electrodes attached to their bodies, Americans are looking for a new kind of foreign policy. And with multiple corporate mergers, rising poverty rates, and economic inequality unparalleled since the Gilded Age, Americans can’t afford anything but new domestic policies.

Obama or Clinton can provide an alternative to the morality offered by McCain. All they need to do is recognize the new feminized majority, and embrace it.