Here, at Women’s Enews. Here is an excerpt:

… If you’re a female teen who dreads middle school math, you might just go to a bookstore and consider buying “Math Doesn’t Suck.”

It’s that girly-girl math text by TV actress Danica McKellar, who has managed to fill up an entire book with sundress stumpers accompanied by teen stories of triumph over numeric nightmares, horoscopes, personality quizzes and a syrupy sales pitch that math–yes, math–doesn’t diminish your status as the coolest girl in school.

It’s the kind of book that, on the surface, makes my skin crawl. It’s loaded with outdated stereotypes that reinforce traditional gender roles. It’s got cutesy illustrations and mimics Cosmopolitan. It has an unhealthy obsession with presenting math lessons as exercises in how to manage dating, shopping or figuring out how many shoes will fit in the closet, among other empty-headed obsessions.

When I first bought the book and took it home with me, I was expecting to spend an evening chortling and hooting while brushing up on my fractions.

Instead, I was struck by what a clever answer McKellar–who came to fame on TV’s “The Wonder Years” and “The West Wing” but has real credentials as a mathematician–has provided to what is a pressing problem for all of us: the dearth of women and girls in math-intensive fields. …

The website for “Math Doesn’t Suck,” by Danica McKellar, is here. 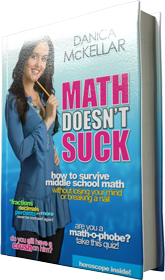 This entry was posted in Feminism and Culture, Recommended Books. Bookmark the permalink.