Toward a non-barbaric form of footwear? 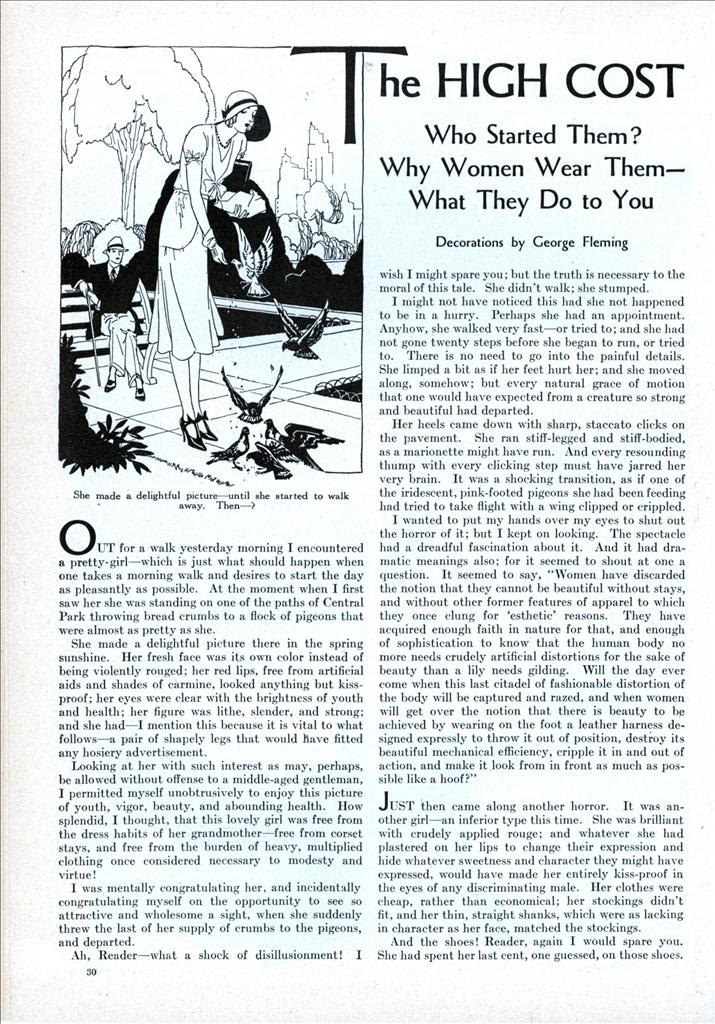 Via Jezebel, a link to an article that apparently appeared in 1930 in a magazine called Physical Culture, called The High Cost of High Heels. It’s heavily infused with all manner of sexism, classism, and other forms of bigotry, all rhetorically linked to high heeled shoes and how stupid women are to wear them. Here is an excerpt:

Ah, Reader:what a shock of disillusionment! I wish I might spare you; but the truth is necessary to the moral of this tale. She didn’t walk; she stumped.

I might not have noticed this had she not happened to be in a hurry. Perhaps she had an appointment. Anyhow, she walked very fast:or tried to; and she had not gone twenty steps before she began to run, or tried to. There is no need to go into the painful details. She limped a bit as if her feet hurt her; and she moved along, somehow; but every natural grace of motion that one would have expected from a creature so strong and beautiful had departed.

Her heels came down with sharp, staccato clicks on the pavement. She ran stiff-legged and stiff-bodied, as a marionette might have run. And every resounding thump with every clicking step must have jarred her very brain. It was a shocking transition, as if one of the iridescent, pink-footed pigeons she had been feeding had tried to take flight with a wing clipped or crippled.

I wanted to put my hands over my eyes to shut out the horror of it; but I kept on looking. The spectacle had a dreadful fascination about it. And it had dramatic meanings also; for it seemed to shout at one a question. It seemed to say,”Women have discarded the notion that they cannot be beautiful without stays, and without other former features of apparel to which they once clung for â€˜esthetic’ reasons. They have acquired enough faith in nature for that, and enough of sophistication to know that the human body no more needs crudely artificial distortions for the sake of beauty than a lily needs gilding. Will the day ever come when this last citadel of fashionable distortion of the body will be captured and razed, and when women will get over the notion that there is beauty to be achieved by wearing on the foot a leather harness designed expressly to throw it out of position, destroy its beautiful mechanical efficiency, cripple it in and out of action, and make it look from in front as much as possible like a hoof?”

JUST then came along another horror. It was another girl:an inferior type this time. She was brilliant with crudely applied rouge; and whatever she had plastered on her lips to change their expression and hide whatever sweetness and character they might have expressed, would have made her entirely kiss-proof in the eyes of any discriminating male. Her clothes were cheap, rather than economical; her stockings didn’t fit, and her thin, straight shanks, which were as lacking in character as her face, matched the stockings.

And the shoes! Reader, again I would spare you. She had spent her last cent, one guessed, on those shoes.

I don’t know what the heels of them would have measured in inches, but they stood her literally on her toes, and kept her there. Also, they tapered down almost to a point, so that her feet wobbled unsteadily every time she put them down. As was necessary with her feet in such a position, she toed out as she walked. One wondered that she could even stand.

All this, of course, made a violent change, necessarily, in her center of gravity. To accommodate to this displacement of her feet, she had to alter the position of her whole body in order not to topple over. She carried her pelvis thrust forward and her chest back as far as possible. In order to make her posture conform as completely as possible to her shoes, she also kept her knees slightly bent. She made a queer and grotesque sight. One wondered how she could walk. As for running, she wasn’t having any.

ALL that was needed to make her perfect and complete, an utter caricature, was plenty of fat. A fat woman, stumping along on a pair of those pointed heels, I reflected, would have made this morning’s experience with certain feminine notions of beauty complete. I would wait, I decided hopefully. Maybe the Queen of Love and Beauty:the Ultimate”It”Lady:would show up. Nothing short of 250 pounds, and heels three inches high, tapering to nothing, and calves six inches in diameter, tapering toward the heels, would satisfy my desire to see the Perfect Thing. So I waited. For anything can happen in New York.

Reader, believe it or not, she came. A diminutive but fat little Pomeranian was leading her along by the string, guiding her in such a manner as to keep her in the middle of the walk, while she devoted her entire attention to putting down her feet in alternation, and balancing herself as she moved from foot to foot, so to speak. It was an inspiring sight:such nerve:such verve:such adaptability to the pull of gravitation. One felt that with her talents she should have been on stilts, or:a tight-rope.

I hate high heels but if I’d met a character like this guy I’d have been tempted to slip on a pair just to irritate him.