There’s Something About Marriage: New York Trial Court Uses Differences Between a Marriage and a Civil Union to Refuse to Dissolve the Latter 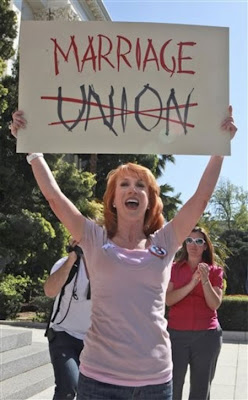 “Civil union” means that two eligible persons have established a relationship pursuant to this chapter, and may receive the benefits and protections and be subject to the responsibilities of spouses.

(a) Parties to a civil union shall have all the same benefits, protections and responsibilities under law, whether they derive from statute, administrative or court rule, policy, common law or any other source of civil law, as are granted to spouses in a marriage.

(b) A party to a civil union shall be included in any definition or use of the terms “spouse,” “family,” “immediate family,” “dependent,” “next of kin,” and other terms that denote the spousal relationship, as those terms are used throughout the law.

(c) Parties to a civil union shall be responsible for the support of one another to the same degree and in the same manner as prescribed under law for married persons.

Postscript by the New York Supreme Court, Westchester County: Well, not really. Oh, and certainly not if you leave Vermont!

during the course of their relationship, defendant became an alcoholic and on numerous occasions became abusive both verbally and physically towards plaintiff. Plaintiff state[d] that defendant began an intimate relationship with another woman and in October 2008 defendant told plaintiff that she wanted to divorce and wanted plaintiff to move out of the house.

The problem? At the time, B.S. and F.B. were living in New York and did “not meet the residency requirements to commence an action in Vermont to dissolve their union.” So, could the plaintiff have the “Civil Union” dissolved in New York? According to the Supreme Court, Westchester County, the answer was “no.”

The court began by noting that it was dealing with “a novel issue previously unaddressed by New York courts”: “Where, as is the case in New York, their current domicile does not provide for civil unions,…[can] courts of the state…recognize the civil union for the purposes of dissolving it[?]” Then, the court summed up prior precedent as follows: “[T]he essential predicate for each judicial determination is the existence of a valid marriage.”

And that was the problem for the plaintiff. According to the court,

While falling short of placing a civil union on the same level as a valid marriage, New York has evidenced by executive and local orders a clear commitment to respect, uphold and protect parties to same sex relationships and their families….The Vermont Legislature’s decision to create a civil union was an recognition of the right of same sex couples to have some legal protections and some of the rights and responsibilities of opposite sex married people….But in enacting the statute Vermont also evidenced a reluctance to extend the right to “marry” to same sex couples. The New York State Bar Association’s May 4, 2009 “Report and Recommendation on Marriage Rights for Same Sex Couples”, finds that the civil union model although intended to provide equality, in fact, has created a separate legal status with inherent disadvantages, unequal and uncertain legal rights and problems of portability crossing state lines.

The court did hint that there might be other ways for the plaintiff to resolve her “Civil Union,” but the way in which any married person could have achieved a dissolution of her marriage was not one of them.

There is, however, another, somewhat happy postscript to the matter: Same-sex marriage becomes legal in Vermont on September 1. That will do a lot of good for a lot of people, but it won’t be of any help to those who entered into “Civil Unions” in Vermont before that date and those who will continue to enter into them in other states, at least to the extent that those people travel to the Big Apple and want to dissolve their unions.

This entry was posted in Courts and the Judiciary, Feminism and Families, LGBT Rights. Bookmark the permalink.

5 Responses to There’s Something About Marriage: New York Trial Court Uses Differences Between a Marriage and a Civil Union to Refuse to Dissolve the Latter