Today the Army will make Command Sgt. Maj. Teresa L. King commandant of its drill sergeant school at Fort Jackson in Columbia, South Carolina. It is a first. No woman has previously run one of the Army’s rigorous schools for drill instructors. 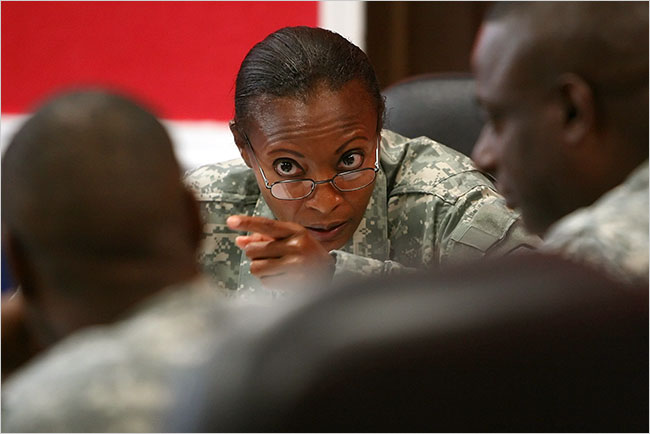 … The eighth of 12 children, the sergeant major is the daughter of a sharecropper who grew cucumbers and tobacco near Fort Bragg, N.C. Her first job in the Army was as a postal clerk, a traditional position for women in those days.

She says she regrets not having been deployed to a war zone during her 29-year Army career, though she has trained many soldiers who were. And now, in her new job, she will have significant influence over the basic training of every enlisted soldier.

Last year the Army consolidated several drill schools into a single campus at this sprawling post, meaning Sergeant Major King, with her staff of 78 instructors, will oversee drill sergeant training for the entire Army.

Famous for their Smokey Bear hats, booming voices and no-nonsense demeanor, those sergeants transform tens of thousands of raw recruits into soldiers each year. It is one of the backbone jobs of the military, and having a woman in charge underscores the expanding role of women in the Army’s leadership.

But Sergeant Major King’s ascension is also a reminder of the limits of gender integration in the military. Just 8 percent of the active-duty Army’s highest-ranking enlisted soldiers : sergeants major and command sergeants major : are women, though more than 13 percent of Army personnel are female. …

This entry was posted in Feminism and Culture, Firsts, South Carolina, The Underrepresentation of Women. Bookmark the permalink.