Posted on December 11, 2009 by Stephanie Farrior 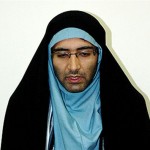 I share with permission the following commentary received today from Hossein Alizedah of the International Gay and Lesbian Human Rights Commission (IGLHRC):

Earlier this week, the Iranian authorities arrested Majid Tavakoli, a  student leader, who spoke at an anti-government rally in Tehran  University, marking Student Day in Iran. To humiliate him, the authorities published a picture of him wearing a woman’s headscarf, an  old practice by the government to prove to the public that the    opposition leaders are “less than a man”, lacking courage and bravery.   This time around though, the anti-government movement quickly responded by posting pictures of hundreds of men, wearing a headscarf.

[Watch activists’ video “we are all MAJIDS“]

It is ironic how the headscarf, which was traditionally seen as a symbol of  women’s oppression (they are forced to wear it in public in Iran), is  now being used by men to show membership in a liberating movement.   It is worth noting that it is a violation of law to cross-dress in Iran.

A  popular website in Iran has a webpage headed  “Solidarity” inviting people to    “Be a man — Send your “woman” photo in defense of Majid Tavakkoli.”   Comments posted on the site by readers are  not only showing solidarity for Majid, but also speaking out against the forced wearing of the hejab by women.
(Cross-posted at IntLawGrrls)
– Stephanie Farrior
Vermont Law School

2 Responses to Solidarity: Men in headscarves