Posted on February 25, 2010 by Bridget Crawford 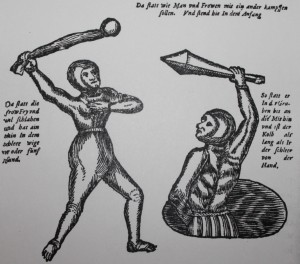 A facsimile of a 15th Century Manuscript from the GERICHTLICHE ZWEIKAMPF, 1873, reproduced in HENRY C. LEA, THE DUEL AND THE OATH 154 (1878)

Mark Egerman (Staff Counsel, National Abortion Federation) has posted to SSRN his working paper, “Avoiding Confrontation,” a a feminist critique of evidence law.  Here is a portion of the abstract:

This article takes seriously Justice Scalia’s facetious aside in Giles v. California and examines whether there should be a separate confrontation doctrine for domestic violence cases. The history of Confrontation is explored, starting with one of its predecessors, the judicial duel. Dueling was used as a judicial fact-finder for centuries and developed a complex series of regulations that focused not only on accuracy, but also on the status of the participants. As the doctrine of confrontation developed, it retained some of the substantive status-oriented elements of dueling. An analysis of major cases from the Common Law and the Supreme Court tracks these developments and uncovers these elements. Modern confrontation doctrine is shown to embody non-adjudicatory elements concerned with status and social power.

These elements imagine a series of relationships between accuser and accused that do not adequately address the concerns reflected in Domestic Violence situations. Hierarchical crimes which focus on the domination of a subordinated victim present different concerns than the types of crime anticipated by our doctrine of confrontation ….The article concludes by proposing the partial unincorporation of the Confrontation Clause as it applies to victims of domestic violence in state courts.

Egerman’s article includes a discussion of the origins of the “judicial duel,” which served as a form of discovery.  Not just men dueled.  Egerman uses the illustration, above right, showing a 15th century woman dueling with a man to explore the history of women’s participation in the evidentiary process:

Some locations forbid the practice altogether. Others made  specific accommodations that resulted in a process that must rank high on  any list of bizarre judicial practices. In order to ensure a fair fight between  a man and a woman, and thus best establish the facts of the case, the man  was placed up to his navel in a pit three feet wide. The man had his left  hand tied behind his back while the woman was able to use all of her  limbs. The man was given only a club, while”his fair opponent has the  free use of her limbs and was furnished with a stone as large as the fist, or  weighting from one to five pounds, fastened in a piece of stuff.”  In at  least one jurisdiction, this procedure was limited only to accusations of  rape. These regulations reflect an interest in sex roles and the ability of  women to participate in formal evidentiary practices â€“ specifically their  inability to participate as equals. (citations omitted)