An all women Supreme Court?

It’s not impossible.   The Texas Supreme Court is a testament to the possibility.   It happened eighty-five years ago,   if only for a single case.

In 1925, the Texas Governor appointed three women to fill all the positions on the Texas Supreme Court to hear a single case:   an appeal involving Woodmen of the World, a fraternal group whose members included virtually every male lawyer in the state. 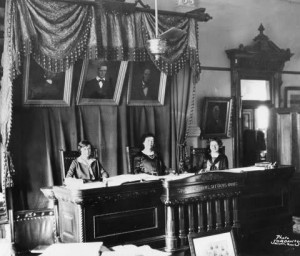 The Texas Lawyer Blog found this bit of history relevant because Justice Harriet O’Neill, a woman, presided over oral arguments at the Texas Supreme Court yesterday, due to an absence and a recusal, thus becoming the first woman since 1925 to do so.

This entry was posted in Courts and the Judiciary, Feminism and Law, Feminist Legal History, If you're a woman, Legal Profession, The Underrepresentation of Women. Bookmark the permalink.

2 Responses to An all women Supreme Court?