Public Forum Series in London on Gender and Scientific Advances

Posted on October 8, 2010 by Bridget Crawford 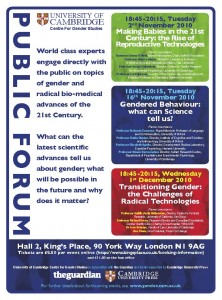 The University of Cambridge Centre for Gender Studies is holding a three public fora in London on November 2, 2010.  The theme is gender and bio-medical advances of the 21st Century.  Here’s the info:

November 2, 2010: “Making Babies in the 21st Century: The Rise of Reproductive Technologies

This entry was posted in Feminism and Science, Feminism and Technology, Reproductive Rights, Upcoming Lectures. Bookmark the permalink.