The Origins of Sexual Freedom

Faramerz Dabhoiwala breaks down the topic in The Origins of Sex: A History of the First Sexual Revolution, a book forthcoming (April 2012) from Oxford University Press.  Here’s the publisher’s description: 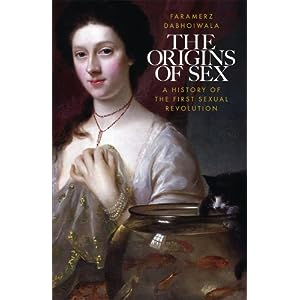 A man admits that, when drunk, he tried to have sex with an eighteen-year-old girl; she is arrested and denies they had intercourse, but finally begs God’s forgiveness. Then she is publicly hanged alongside her attacker. These events took place in 1644, in Boston, where today they would be viewed with horror. How–and when–did such a complete transformation of our culture’s attitudes toward sex occur?

In The Origins of Sex, Faramerz Dabhoiwala provides a landmark history, one that will revolutionize our understanding of the origins of sexuality in modern Western culture. For millennia, sex had been strictly regulated by the Church, the state, and society, who vigorously and brutally attempted to punish any sex outside of marriage. But by 1800, everything had changed. Drawing on vast research–from canon law to court cases, from novels to pornography, not to mention the diaries and letters of people great and ordinary–Dabhoiwala shows how this dramatic change came about, tracing the interplay of intellectual trends, religious and cultural shifts, and politics and demographics. The Enlightenment led to the presumption that sex was a private matter; that morality could not be imposed; that men, not women, were the more lustful gender. Moreover, the rise of cities eroded community-based moral policing, and religious divisions undermined both church authority and fear of divine punishment. Sex became a central topic in poetry, drama, and fiction; diarists such as Samuel Pepys obsessed over it. In the 1700s, it became possible for a Church of Scotland leader to commend complete sexual liberty for both men and women. Arguing that the sexual revolution that really counted occurred long before the cultural movement of the 1960s, Dabhoiwala offers readers an engaging and wholly original look at the Western world’s relationship to sex.

Read the full description here.  In the pages of the Guardian (U.K.), Dabhoiwala writes:

It’s no accident that all these early celebrations of the new sexual world were voiced by white, upper-class men. In practice, sexual liberty was limited in important ways. The bastardy laws continued to apply to the labouring classes: their morals remained a public matter. The new permissiveness towards “natural” freedoms also led to a sharper definition and abhorrence of supposedly “unnatural” behavior.  * * *

Yet the general advance of sexual freedom and the expansion of urban life also fostered the development of an increasingly assertive homosexual sub-culture. Some of the most remarkable utterances of the 18th century were the first principled defences of same-sex behaviour as natural, universal and harmless. * * *

Attitudes towards women’s sexuality underwent similarly dramatic shifts. The idea that sexual freedom was as natural and desirable for women as for men was born in the 18th century. By the early 19th century, many feminists, socialists and other progressive thinkers on both sides of the Atlantic decried marriage and advocated free love as a means to the emancipation of women and the creation of a more just society.