Court of Appeals Prop 8 Ruling – Treating Marriage as a License, Not a Sacrament

Posted on February 8, 2012 by Katherine Franke

Rainbow flags and corsages were waving high in front of the Stonewall Inn in Greenwich Village last night.  There’s much to celebrate about the 9th Circuit’s ruling issued yesterday confirming the lower court finding that Proposition 8 was unconstitutional.  As I noted yesterday and Nan Hunter pointed out as well in her reading of the opinion, the reasoning used by the court minimizes the likelihood that the Supreme Court will take it up on appeal. 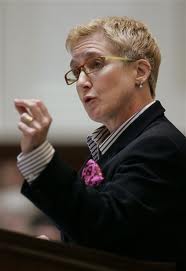 But what’s even more interesting about the opinion, now that I’ve had overnight to think about it, is the degree to which the 9th Circuit’s ruling amounts to a pretty definitive slap down of the Boies and Olson strategy in litigating the case.  Recall that one of the main approaches taken at the trial by the so-called “dream team” was to paint a picture of marriage as the most sacred, revered, mature form of adult coupling, thus denying access to marriage for same-sex couples is a constitutional injury because of the fundamental-ness and sacredness of marriage.

Instead, the reasoning used in Judge Stephen R. Reinhardt’s opinion marks a triumph for the fabulous and smart Therese Stewart, the lawyer in the San Francisco City Attorney’s office who has shined time and again in oral argument and in briefs filed in the marriage equality litigation in California.

Judge Reinhardt chose Stewart’s argument, not that of Boies and Olson, as the ground on which to base the affirmance of Judge Walker’s lower court opinion.  Indeed, he even said so explicitly on page 33 of the opinion.  Her argument was that the wrong of Proposition 8 lie in how “it singles out same-sex couples for unequal treatment by taking away from them alone the right to marry, and this action amounts to a distinct constitutional violation because the Equal Protection Clause protects minority groups from being targeted for the deprivation of an existing right without a legitimate reason.”

The case, in Stewart’s and the 9th Circuit’s view, turned on the fact that Prop 8 withdrew from same-sex couples a right that California had already  granted them.  This creates a different constitutional injury than refusing to grant the right in the first place.  In the court’s words, the problem under this framing is “the targeted exclusion of a group of citizens from a right or benefit that they had enjoyed on equal terms with all other citizens.”

The wisdom of this approach, to my mind, is that the constitutional problem turns on the withdrawal of the right, not on the sanctity or fundamental-ness of the right withdrawn.

Reinhardt is clear about this:  “The constitutional injury … has little to do with the substance of the right or benefit from which a group is excluded, and much to do with the act of exclusion itself.”

What’s wonderful about this approach is that it not only minimizes the likelihood of Supreme Court review, but it avoids the kind of sermonizing about the sanctity of the marital relation that characterized Olson and Boies’ approach as well as that of a number of courts that have addressed the marriage equality issue.  The court can find a constitutional problem with Prop 8 while remaining agnostic on the question of marriage and on the question of whether the state should be in the marriage business at all.   In this respect, the 9th Circuit and Stewart figure marriage as akin to any other state licensing regime: you may not have a constitutional right to the license in the first place (such as a fishing license), but once you start issuing the licenses you can’t then target a particular group, such as catholics, Romanians, or gay people, and take away their right to the license.

I’ve railed on in other places (here, here, and here for starters) about the difference between the fundamental rights argument and the “marriage as license” approach, clearly preferring the latter.  I’m thrilled that the 9th Circuit’s opinion in Perry has joined the less moralistic side of the argument, rejecting the tactic taken by Boies and Olson at trial.

Let’s hope that if and when the case is appealed, wiser minds let Terry Stewart take the lead in framing the question on appeal.