This is the second in a series of four blog posts that discuss discrimination and harassment in cyberspace, its perpetrators, and its consequences.  The first post is available here.

Last week I wrote about the way that people attack women and people of color online by demeaning their identity rather than engaging with their ideas.

Thanks to the Internet, harassment happens in real time.  Shortly after I put up my post, an unknown person started a blog* consisting solely of derogatory racial and sexual statements about me, accompanied by pictures of me copied without permission from various online sources.   Again, this helpfully demonstrates my claim that harassers use identity to avoid engaging with ideas: 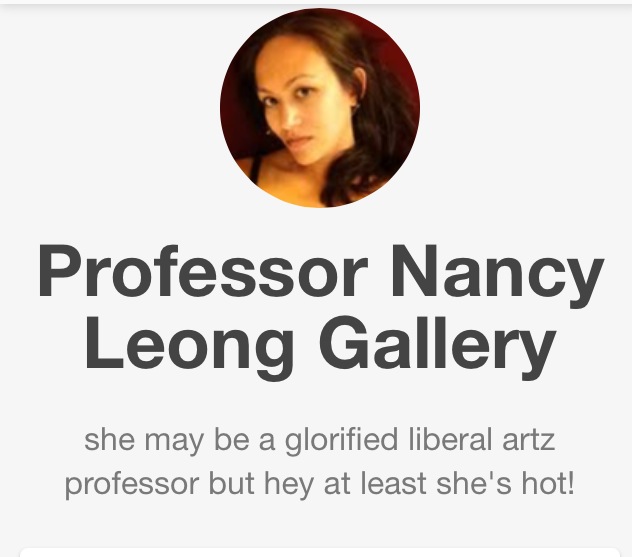 The creation of this blog also aptly illustrates Slate columnist Katy Waldman’s thoughtful discussion of my previous post, in which she hypothesized that when men are harassed, they are treated as “less than men,” while when women are harassed, they are treated as “only women.”  There are, of course, other dynamics at play as well.  But the blog’s attempt to reduce a law professor acting in her professional capacity to a sexualized object for visual consumption readily demonstrates Waldman’s conception of harassment as reduction to identity as “only a woman.”

Although online harassment is nothing new to me, I was still surprised by how many people that I know personally revealed to me after my previous post that they had experienced such harassment.  A half dozen other professors disclosed that they used to blog and had either stopped or curtailed their blogging in response to harassment and — in some cases — threats of rape or other violence.  Another friend told me that the reason she gave up a prestigious job with a news organization was the relentless online harassment she experienced.  One of my students told me that she used to write for a feminist blog, but stopped after online harassers posted comments about her and even started a thread on Reddit that disclosed details such as her address.  Another student explained that she had been invited to post on a well-known blog, but had declined the opportunity because she was unwilling to expose herself to the blog’s aggressive and frequently sexist commenting environment.

All of the people who shared these stories with me were women, and several were women of color.  Although — as I said in my previous post — I don’t think that identity-based online harassment is limited to women and people of color, these groups are often the targets of online harassment.

What is it about the Internet that brings out this ugliness?  Some have hypothesized that the lack of face-to-face contact loosens normal social inhibitions.  A recent Wall Street Journal article, “Why We Are So Rude Online,” credits MIT Professor Sherry Turkle with the insight that “[b]ecause it’s harder [online] to see and focus on what we have in common, we tend to dehumanize each other.”  Or, as Louis CK puts it, the Internet keeps us from building empathy.

Online anonymity worsens the empathy deficit.  Unsurprisingly, evidence suggests that people behave in antisocial ways when granted anonymity.  Research such as this classic study has long implicated anonymity in group antisocial behavior, thus explaining the way that anonymous posters often seem to encourage one another.  And Saul Levmore and Martha Nussbaum’s excellent anthology The Offensive Internet explores the role of anonymity from a range of perspectives.  (Of course, anonymity is far less ironclad than some posters seem to think — indeed, I was easily able to discover the identities of a few of my harassers using google, one in less than ten minutes. I’ll discuss this further in a future post.)

Intuitively and from this research, most people conclude that anonymity has something to do with online abuse.  Yet some refuse categorically to question whether anonymous speech is inherently valuable.  For example, anonymous commenters sometimes point to the Federalist Papers as a paradigmatic justification for anonymous speech.  I happen to like the Federalist Papers a lot, so let’s take a look at an excerpt from one of my favorites, Federalist #51, written by James Madison under the pseudonym Publius:

Now let’s compare Federalist #51 to a few anonymous and pseudonymous comments that were made about me in threads relating to my scholarship about race.  As I mentioned in my previous post, I’m using myself as an example because I don’t want to draw attention to the harassment of other people.  But such comments are typical of identity-based online harassment. 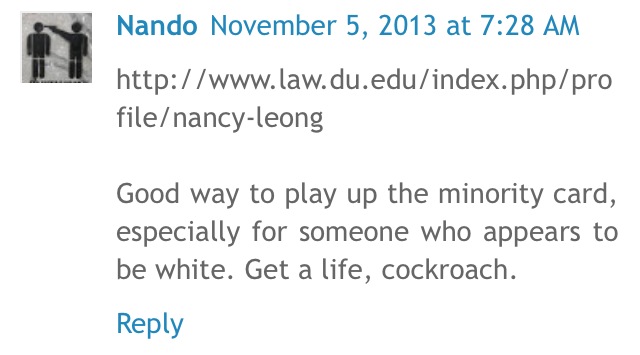 Most of us can see the difference between Federalist #51 and these crude comments.  Federalist #51 explains the need for a government involving both separation of powers and checks and balances — a framework that fundamentally informed the system of government that our founders developed.  These contentions implicate the core structures of a democratic society.

In contrast, the various anonymous comments about me have no purpose other than to harass and no content other than racially and sexually demeaning language.  And the reason they’re anonymous is obvious.  The commenters want to make racist, sexist, and sexually harassing comments without having to suffer the consequences of engaging in such speech in real life.  Such speech contributes literally nothing to discourse.  And to briefly retread ground I covered in my first post, it’s worth noting that each thread I’ve referenced above started out as a thread at least nominally about my scholarship and my ideas, but quickly shifted to comments about my identity.

The claim that anonymity inherently promotes First Amendment values thus makes little sense in a world of race- and gender-based online harassment.  To be clear, I have no problem with anonymity per se — indeed, I agree with the Supreme Court’s statement in McIntyre v. Ohio Elections Commission that “[a]nonymity is a shield from the tyranny of the majority.”  When people write anonymously, but do so in a way that contributes to discourse, it seems to me that the choice to withhold one’s name is up to the individual.  Indeed, anonymity might empower some marginalized speakers to engage in discourse who would otherwise remain silent.

But when anonymity facilitates harassing and abusive speech directed at marginalized identity groups, society has a strong First Amendment interest in regulating anonymity.  Harassing and abusive speech results in a net loss to the marketplace of ideas.  Online racial and gender harassment silences the speech of many women and people of color, diminishing the diversity of perspectives represented in online discourse and impoverishing the “free trade in ideas” within “the competition of the market” that Justice Holmes first discussed in his famous dissent in Abrams v. United States.  If we really care about the marketplace of ideas, we should care about eliminating online racial and gender harassment.

Some argue that racial and gender harassment are part and parcel of participation in online discourse.  As one white man commented on my prior post:  “Welcome to the jungle . . . . If you want to have a voice . . . just do what we have been doing for over a decade and laugh it off.”  (In context, “we” meant “white men.”)  Of course, it’s easy to talk about “laughing it off” when, because of your status as a white man, you’re virtually never the target of identity-based harassment that deploys historically subordinate or marginalized status as a silencing tool.

But in 2013 our social norms don’t actually condition having a voice on putting up with identity-based harassment.  Suppose that I gave a presentation at an academic conference, and that during my presentation a member of the audience began shouting racial and sexual epithets, or announced loudly, “I’m undressing you with my eyes!”  Would we laugh it off?  Of course we wouldn’t.  We’d remove him.  So why do some people insist that the norms applicable to anonymous online speech should be different?

In my view, they shouldn’t be different.  I think that the reason we would restrain a workplace harasser from certain racial and sexual comments (as, indeed, we do, under Title VII) is the same reason we should strive to prevent anonymous online abuse including the same content.

In my next post, I’ll outline some of the ways that we should engage in eliminating this type of harassment.  Socially, I think there is a much greater role for website administrators to play.  And legally, I think that we can draw a doctrinally sound distinction between anonymous speech that should receive First Amendment protection and abusive anonymous speech involving identity-based harassment.

* I have chosen not to link to, or to identify, the sources of the material I reference in this post because I do not want to drive traffic to websites that tolerate racial and sexual harassment.  If you would like more information, please feel free to contact me.
– Nancy Leong

3 Responses to Anonymity and Abuse