Posted on December 20, 2019 by Bridget Crawford 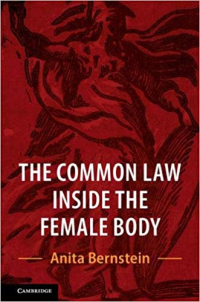 ss 2019), including a response by Professor Bernstein.  Here is the publisher’s description of the book:

Bridget J. Crawford, The Common Law as Silver Slippers
David S. Cohen, The Promise and Peril of a Common Law Right to Abortion
Joanna L. Grossman, Women are (Allegedly) People, Too
Cyra Akila Choudhury, The Common Law as a Terrain of Feminist Struggle
Margaret Chon, Intellectual Property Infringement and the Right to Say No
Maritza I. Reyes, The Female Body in the Workplace: Judges and the Common Law
Teri A. McMurtry-Chubb, In Search of the Common Law Inside the Black Female Body
Anita Bernstein, Negative Liberty Meets Positive Social Change