The Boston College Law Review E. Supp. has published a symposium issue devoted to Anita Bernstein’s book, The Common Law Inside the Female Body (Cambridge University Press 2019), including a response by Professor Bernstein. This symposium is a companion to one held by the Northwestern Law Review Online earlier this academic year (here). 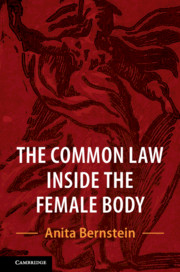 Here is the publisher’s description of the book: