Does @WV Courts Have a Secret Policy Permitting Tampons and Pads at the Bar Exam? #bloodybarpocalypse

Over at the ABA Journal (here), Stephanie Francis Ward confirms that, yes, there are really are states the prohibit test-takers from bringing menstrual products with them to the bar exam. Here’s an excerpt of the article:

Susan Henricks, executive director of the Texas Board of Law Examiners, in an email to the ABA Journal confirmed that the state does prohibit feminine hygiene products in the testing room. Texas, which has an in-person exam scheduled for September, as well as an online October test, will stock testing center bathrooms with free menstrual supplies, Henricks wrote.

Arizona for many years included feminine hygiene products in a “paper of any kind” ban from the bar exam room, but the restriction has been revised, and people can now bring their own tampons and sanitary napkins to the test, Aaron Nash, communications director for the state supreme court, told the ABA Journal in a July 17 email. The state is planning for a July in-person bar exam.

In West Virginia, which also has plans for an in-person July exam, there is no prohibition on bringing menstrual products to the test, says Edythe Nash Gaiser, clerk of the court. She thinks there may be some confusion based on how the court’s exam FAQs page is written.

“No one is afraid of anyone using a tampon as a cheat sheet; this is just insanity,” Gaiser says.

Also, West Virginia bar exam takers can keep their tampons and sanitary napkins in an opaque container, rather than a clear plastic bag, Gaiser says.

“We might say, ‘Is that a feminine hygiene product?’” she adds. And if someone took out and opened a tampon or sanitary napkin while taking the bar exam, that would raise suspicion, according to Gaiser.

Um, so the West Virginia Courts permit test-takers to bring menstrual products, but simply don’t say that anywhere in their instructions to test takers? Let’s hope that Ms. Gaiser can clarify that for bar-exam takers on the court’s website or in an email to them.

Professor Marcy Karin (@professormlk) breaks it down on Twitter here: 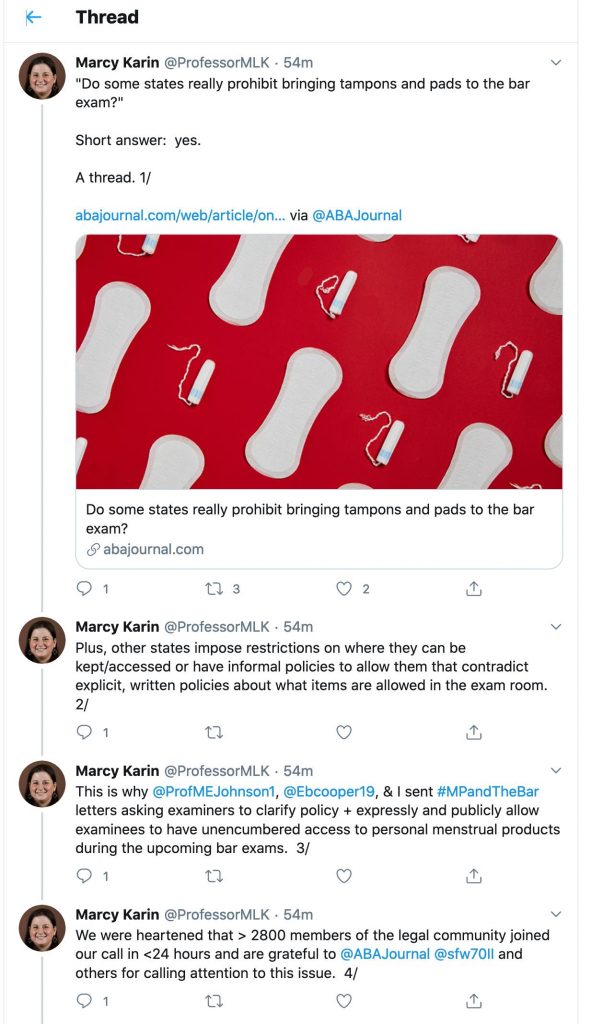 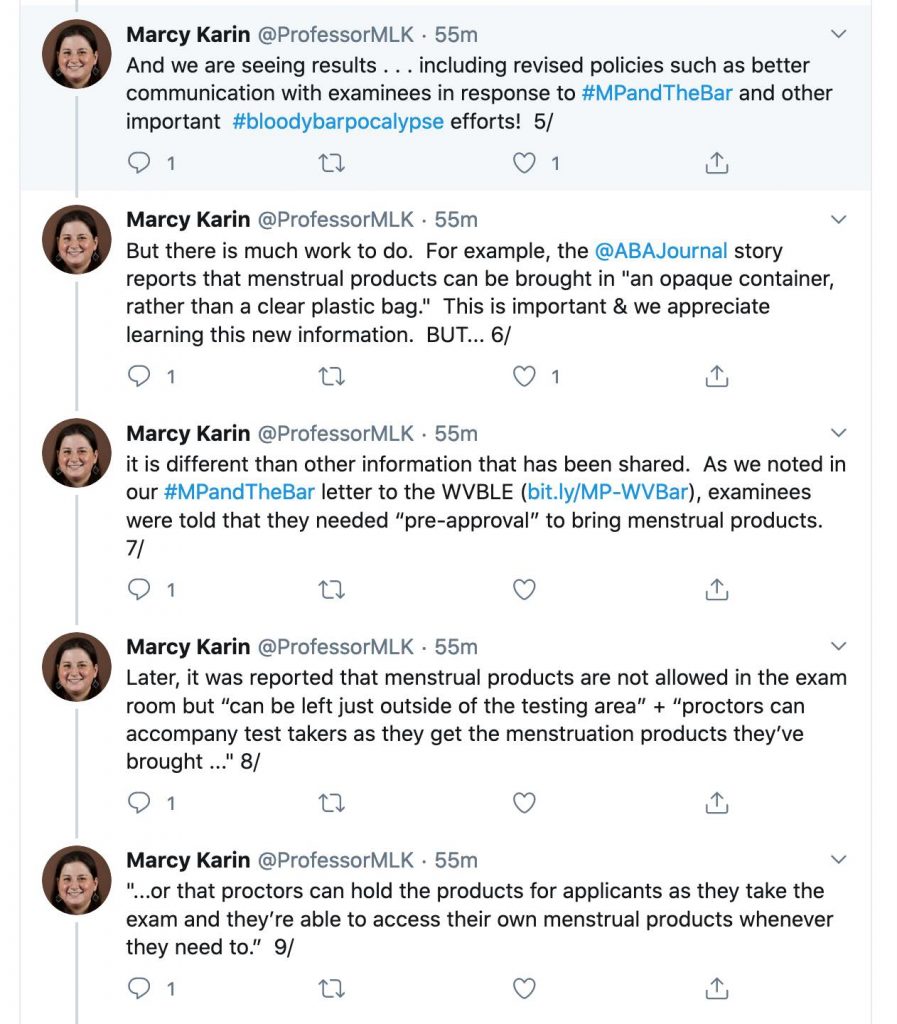 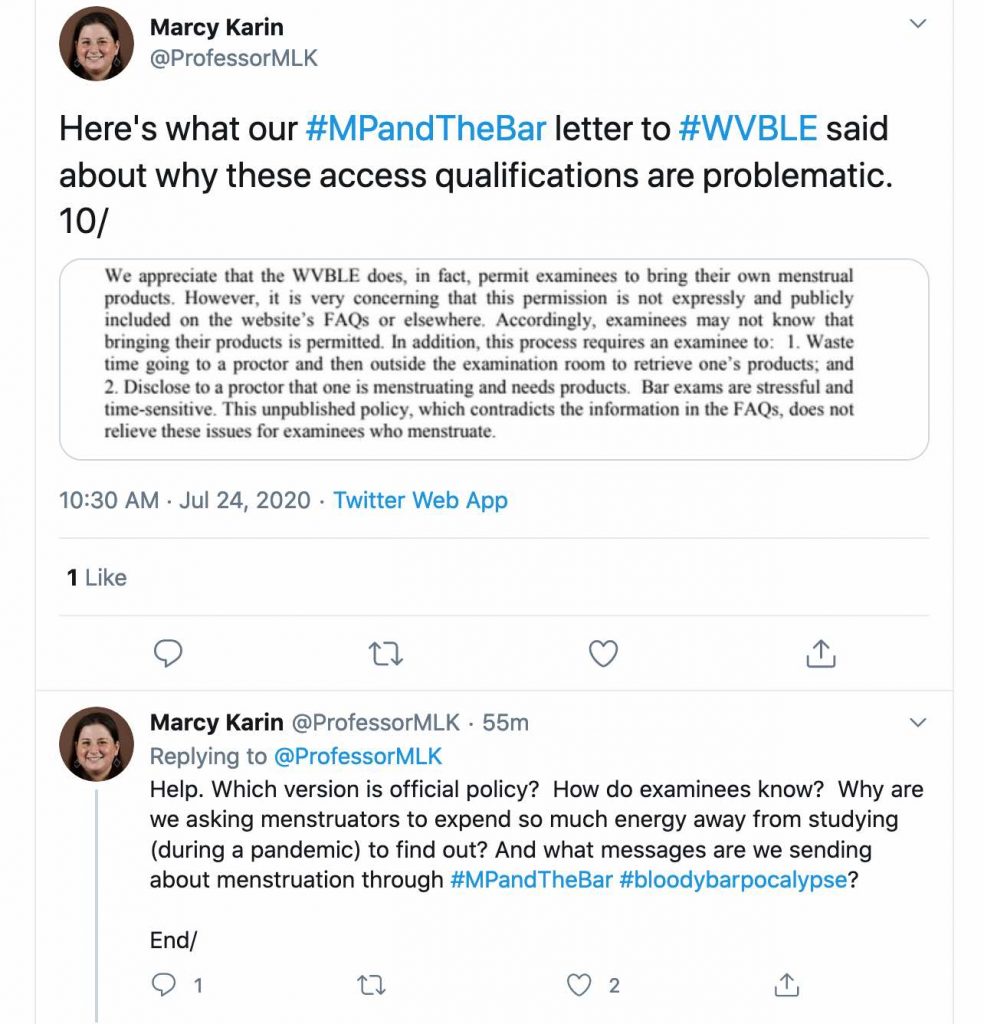 This entry was posted in Legal Profession. Bookmark the permalink.