Battling Trolls, Goblins and Structural Sexism: How the Period Emoji Ended up on your Phone

If you have a smartphone, it’s pretty likely you’ve used an emoji. These tiny images have become a language of their own and whether it’s a goblin mask, a sad cat or a robot, there’s an image for all manner of surreal and unexpected things. Yet up until October 2019 there wasn’t an image for menstruation, one of the most natural and frequently occurring aspects of girls and women’s bodies.

For decades in Britain, periods were embarrassing, fact. Talking about periods was taboo, period products were called ‘sanitary wear’ and adverts for them showed blue liquid, or better still, never referred to bodily fluids at all. Then in 2017 the BBC broke a story on period poverty. Tina Leslie, a health worker in Leeds and her colleague, had noticed girls were not attending classes during their periods. On questioning, it emerged that the girls were not going to school because they could not afford period products and were afraid of leaking.

The ‘toxic trio’ of period poverty

The story hit a nerve with the British public and overnight it became the top topic of conversation. At the time, we were working for girls’ rights charity Plan International UK. The growing debate seemed to miss one key element, the voices of the girls themselves. We decided to conduct research, working with a network of the UKs leading menstruation experts advising and guiding the work, to hear directly from girls about their experiences of menstruation. Through this work we identified a ‘toxic trio’ of  issues which come together to create the phenomenon ‘period poverty’ in the UK today.

Throughout 2018 the momentum around periods grew, a hugely popular campaign ran to end sales tax on period products, given the name ‘the tampon tax’. In the UK, Scotland led the way in providing free products for pupils in schools, however, those wanting to tackle stigma and taboo found only limited spaces like arts and women’s social media, to change the conversation.

How do we get the public talking about periods?

As girls’ rights campaigners, the challenge for us was: how do we make this an engaging and accessible issue for the mainstream? We decided to try something new. We came at it from a light hearted approach, using fun to get people talking about periods. Out of a late afternoon team brainstorm, the idea of an emoji for menstruation was born. A ‘period emoji’. Something light hearted we could launch on Menstrual Health Day and that supporters, especially young people, could be encouraged to use in conversations online to tackle some of the silence and stigma around periods. This would then pave the way for us to share some of the more serious issues attached to menstruation with this audience who now were talking about periods.

The period emoji idea immediately struck a chord with the people who supported the charity. We ran a poll of women and asked if an emoji was something they would use and if stigma around periods ever held them back.The answers blew us away: two thirds of women did not feel comfortable discussing their period with their Dad or male friends and more than 1 in 10 women did not feel comfortable talking about periods with their female friends. A positive result for us however was they would use the emoji and they felt it would help to make it less ‘awkward’! So off we went, working with activists in the Global North and South as we wanted the design to be as globally appealing as possible. We wanted to make sure our designs were inclusive, wouldn’t further stigma and would work globally, for example, in some communities tampons are not considered an acceptable option.

Who decides on an emoji?

We ran our five designs past a number of experts before putting these out to the public to vote. Our plan was that we would take the winning emoji to the Unicode Consortium to be developed into a global emoji for the emoji keyboard, available on practically all devices these days. The Unicode Consortium, if you didn’t know, is the global body that decides which symbols shall exist in the global language of emoji. At a personal level, negotiating with them about the need for symbols, the tools to speak about women’s bodies, certainly felt like echoes of past feminist battles over language.

If this is something you’d like to hear more about, the documentary Picture Character features our and several others journeys to get an emoji through the Unicode Consortium. 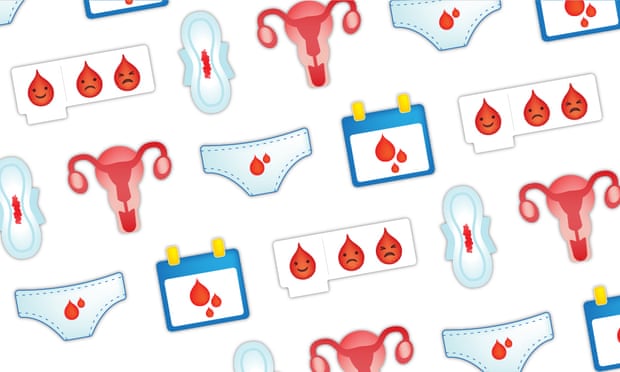 We launched this campaign and asked the public to vote for their favorite period emoji. We expected a few thousand votes at the most. Within days it went viral, we had dozens of celebrities sharing this. We were being featured in the media including radio, TV and press across the UK and then globally. The media weren’t just interested in the emoji, although this was an effective introduction, they also wanted to address the issues that had led to this campaign, as seen by medical journals like the Lancet covering this.

By the end of less than 2 weeks we had over 37,000 votes! And most importantly, the issue was a national conversation. We were thrilled!

At the end of voting, the period pants were the winning design so, as promised we submitted a proposal to the Unicode Consortium to have these made into an emoji. Then the waiting started.

It wasn’t until many months later that we received a brief message from someone at the Unicode Consortium saying simply that the period pants emoji was not being taken forward as it didn’t have a “wide enough useability”. This was a bit of a shock, what with 800 million people menstruating right now and over half the planet having experienced this directly in their lives. It felt much more widely usable than the goblin mask, 12 different types of trains and dumplings, in our opinion. We tried to push back but no luck.

We still had 37,000 people waiting for news of a successful campaign and frankly it felt like a fight worth pursuing, not least because the Consortium’s response showed exactly what we were fighting against: the stigma and silence surrounding periods.

So our next move was to submit another proposal, this time for the runner-up design. Whilst the pants had the most votes, the blood drop came in close second place and was equally inclusive. We were told by the Consortium that NHS Blood was also looking to have a blood drop emoji and that our chances would improve if we teamed up, which we did.

After 2 years of campaigning and liaising with the Unicode Consortium we finally got the blood drop emoji in October 2019.

What impact did the emoji have?

For us, it’s not just the fact that there is now a blood drop emoji on all emoji keyboards globally that was a big win. Perhaps an even bigger win, in our view, was the two years of conversations that happened around the period emoji campaign. The global conversation about periods was shifting dramatically, the USA was changing its tax laws, handmade pads and menstrual cups were growing in popularity in Malawi and Uganda, Pad Man had opened up the conversation to Bollywood and a film about an Indian menstruation activist won an Oscar.

The vast, global media coverage this received was unprecedented for periods, as was the online buzz. The campaign went viral twice in these two years and there was more conversation about periods than ever before. Whilst this online conversation did include the good, bad and the ugly (or rather the extensive and often nasty trolling), in itself this broke down the silence and helped further the cause and awareness of periods, period stigma and period poverty globally. And for this, we are very proud.

The UK movement for period equity went from strength to strength, sex and relationships education became statutory in schools, English schools were given free period products for pupils and the government committed to abolishing the Tampon Tax. We worked closely with the government as they created a new Period Poverty Task Force, committing funding to eradicate the problem. Without a doubt there is still more to do and we have yet to understand the impact of COVID-19 on all of these issues. What we do know is that poor quality education and stigma in the UK and globally are still holding girls and other menstruators back.

Do we hope there will be bloody tampons, pads, pants and uteruses added to the emoji keyboard in the future – yes absolutely!

Do we hope that stigma, shame and secrecy around periods will one day end? Yes we do.

And if the emoji has helped people talk about periods, then we are proud to be part of a global movement to view periods as part of a normal, healthy body.

Break the Barriers: Girls’ experiences of menstruation in the UK, https://plan-uk.org/file/plan-uk-break-the-barriers-report-032018pdf/download?token=Fs-HYP3v

Carmen Barlow is now the Head of Communications and Engagement at Amnesty International UK, continuing campaigning for human rights, awareness of rights’ being infringed and for policy change in the UK and internationally. Carmen was interviewed by Emma Barnett for her book Period about menstrual health and stigma, as well as featuring in the documentary Picture Character on how to get a global period emoji. Leading the period emoji campaign remains one of her proudest achievements.

Lucy Marie Russell campaigns for girls’ rights in the UK and globally. She has secured changes to the law and policy regarding teenage pregnancy, sex and relationships education, street harassment and more. She founded Plan International’s UK work including The State of Girls’ Rights in the UK report. She has run campaigns to end period poverty and taboos and working with Carmen on the blood-drop emoji campaign. More recently she was Deputy Co-Chair of the UK Government’s Period Poverty Task Force and editor of Break the Barriers, a UK wide study of menstruation experiences for adolescent girls.

This entry was posted in Activism, Feminism and Culture, Feminism and Economics, Sisters In Other Nations. Bookmark the permalink.