It’s Not a Feminist Judgment, but 9th Cir. Judge Writes Shadow Opinion to His Own Majority Opinion 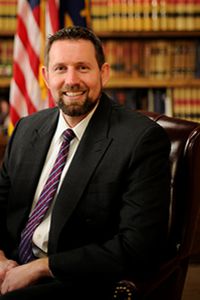 So, it’s not remotely a feminist judgment, in the sense of embracing feminist methods or values (however broadly defined). All the same, a concurring opinion of Judge Lawrence VanDyke of the Ninth Circuit Court of Appeals embraces the project’s methods. Using the same law and facts that he used to write the majority opinion for a three-judge panel deciding a Second Amendment challenge to COVID-related gun store closures, Judge VanDyke has written an “alternative opinion” (to his own opinion) as a concurrence.

His point? Show his colleagues, whom he predicts will hear the case en banc, how to reach the same conclusion with different reasoning.

Read more after the jump.

Today’s National Law Journal features an article here (access via Lexis; sorry) about an “alternative opinion” written by Judge Lawrence VanDyke of the U.S. Court of Appeals for the Ninth Circuit in McDougall v. County of Ventura. A 3-judge panel, including Judge VanDyke, reversed the district court’s order dismissal of a challenge to the county’s 48-day COVID-related closure of gun shops, ammunition shops and firing ranges. Curiously, Judge VanDyke wrote a concurrence to his own opinion, reaching the same results but for different reasons.  Why did he do this? Judge VanDyke writes:

I agree wholeheartedly with the majority opinion, which is not terribly surprising since I wrote it. But I write separately to make two additional points. The first is simply to predict what happens next. I’m not a prophet, but since this panel just enforced the Second Amendment, and this is the Ninth Circuit, this ruling will almost certainly face an en banc challenge. This prediction follows from the fact that this is always what happens when a three-judge panel upholds the Second Amendment in this circuit. 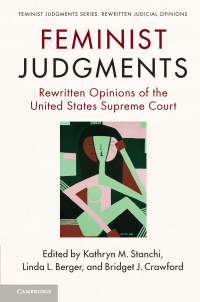 I’m a big fan of “showing not telling” how the legal outcomes or reasoning of cases could have been different, using the same law and facts in effect at the time of the original opinion.  After all, that’s the whole point of the Feminist Judgments projects at various stages in Canada, England & Wales, Australia, the U.S. (a series of books!), Ireland, Scotland, New Zealand, India, Pakistan and Mexico. There’s also a pan-African Feminist Judgments Project and an International Law Feminist Judgments project, with other multi-national projects in the works.

I don’t think Judge VanDyke likely has on his bookshelf a copy of Feminist Judgments: Rewritten Opinions of the United States Supreme Court (Cambridge 2016), edited by Kathy Stanchi, Linda Berger and me.  All the same, Judge VanDyke’s stated reasons for writing an “alternative opinion” resonate:

A judge or group of judges must first write a call memo, and then, if the en banc call is successful, the en banc majority must write a new opinion. Since our court’s Second Amendment intermediate scrutiny standard can reach any result one desires, I figure there is no reason why I shouldn’t write an alternative draft opinion that will apply our test in a way more to the liking of the majority of our court. That way I can demonstrate just how easy it is to reach any desired conclusion under our current framework, and the majority of our court can get a jump-start on calling this case en banc. Sort of a win-win for everyone. To better explain the reasoning and assumptions behind this type of analysis, my “alternative” draft below will contain footnotes that offer further elaboration (think of them as “thought-bubbles”).

Judge VanDyke’s ending his concurring opinion with “You’re welcome” was nonjudicial by Feminist Judgments Series standards, but I’m fascinated by this development. This is the first real-time “rewritten opinion” by a sitting judge that I have come across. Is anyone aware of other instances of judges writing and publishing “alternate opinions”?

This entry was posted in Courts and the Judiciary. Bookmark the permalink.