Ann Rossiter, “Ireland’s Hidden Diaspora: the â€˜abortion trail’ and the making of a London-Irish underground, 1980-2000” 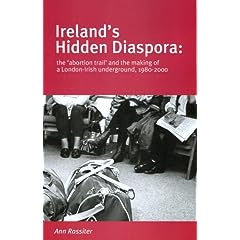 Every year, approximately 5,000 women from the Republic of Ireland and 1,500 from Northern Ireland cross the Irish Sea to have an abortion in a British clinic. They come and go in secret, like women ‘on the run’, bearing a terrible burden of shame for two societies in denial. In fact, much pride is taken in the island being seen as a ‘pro-life’ sort of place. We have been constantly reminded over recent years that Ireland has changed, changed utterly, since the establishment of the Peace Agreement in the North, and the emergence of the Celtic Tiger in the Republic. But, when it comes to the right of a woman to choose, it is a place that is still in the dark ages, north and south of the Border.

This book is not an account of the experience of abortion seekers by the women themselves – we still wait to hear them speak out in their own names. However, an equally important part of this hidden story is told here by London-Irish women who supported many such individuals before, during, and after their lonely, and often frightening journey ‘across the water’. It is also a record of their campaigns for a change in the law in both parts of the island. The supporters and campaigners were members of the Irish Women’s Abortion Support Group (IWASG) and the Irish Abortion Solidarity Campaign (Iasc). The book is a testament to their tireless work, over a twenty year period from the early 1980s, much of which was conducted undercover. In offering new first-hand evidence of such activities, this oral history presents a vivid and timely contribution to debates about the Irish feminist movement in Britain in the late twentieth century.

… Since abortion was legalised in Britain in 1967, it is calculated that more than 150,000 Irish women have had terminations there.

These women are our mothers, aunts, grandmothers, sisters, cousins. They are us.

They were forced to be strong and ingenious to escape two very different States with one very common purpose â€“ to deny them the right to choose.

On their challenging journeys, if they were lucky, some of these women may have encountered the generosity, thoughtfulness and solidarity of a remarkable bunch of people.

Anne Rossiter, a long-standing campaigner on women’s issues, a native of Bruree, Co Limerick, who has lived in London for a quarter of a century, is one of them.

Her scholarly, yet accessible account of the workings of the Irish Women’s Abortion Support Group (IWASG) and the Irish Abortion Solidarity Campaign, is a valuable piece of work.

Peppered with first-person accounts, it gives voice to the women who held out a hand to those forced to leave their homeland to travel to a strange city to have an abortion.

The abortion taboo remains paralysingly strong for Irish women, but this is not a book full of anonymous stories of anonymous women who have had terminations. It is, rather, an account of the times and modus operandi of the informal support and information networks that came to the aid of those women who needed them. …

This entry was posted in Feminism and Law, Recommended Books, Reproductive Rights, Sisters In Other Nations. Bookmark the permalink.