Earlier today, the Topeka City Council, by a vote of 7-3, repealed the local law that makes misdemeanor domestic battery a crime.

The move, the councilors were told, would force District Attorney Chad Taylor to prosecute the cases because they would remain a crime under state law, a conclusion with which he grudgingly agreed.

But will these cases indeed be prosecuted?  And even if they are, how vigorously? It’s not hard to imagine the county DA offering very favorable plea bargains to those charged with misdemeanor domestic battery after being forced to prosecute them by a city who wanted nothing to do with them. Will those charged even spend a day behind bars?

One bystander commented that what had just happened was a “game of chicken between the city and the county.” In a game of chicken, though, you bet your own life on your opponent blinking first. Here, it’s not the necks of the city and county being put on the line. It’s the lives of the victims of domestic battery who have seen their assailants go unpunished.

Sure, on one level, this is politics as usual. But below this cool surface is something more pernicious. What is Topeka really telling domestic battery victims? We don’t care about you. We don’t have the time to bring you justice. We don’t have the resources. What happened to you wasn’t really a crime.

This last line is the bottom line. Topeka officials can try to explain their actions until their mouth get dry. But the bottom line is that they told victims who were punched, kicked, and slapped that they are not victims. That their assailants are not criminals. That if they want recourse, they have to look elsewhere. 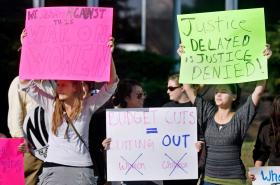 This entry was posted in Acts of Violence, Courts and the Judiciary. Bookmark the permalink.