Is it Feminism “Fault” that Women are Single? 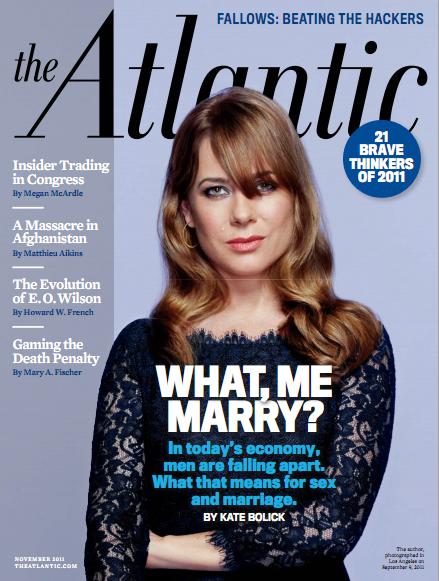 The November, 2011 edition of The Atlantic features a young, single writer and the headline “What Me, Marry?” with the subtitle, “In today’s economy, men are falling apart.  What that means for sex and marriage.”  That sounds like an interesting article.  But click through to the article (here) and the reader finds the article title is “All the Single Ladies.” Reading generously, the article is ambivalent about feminism.   Here’s an excerpt from the story by Kate Bolick:

In 2001, WHEN I was 28, I broke up with my boyfriend. Allan and I had been together for three years, and there was no good reason to end things. He was (and remains) an exceptional person, intelligent, good-looking, loyal, kind. My friends, many of whom were married or in marriage-track relationships, were bewildered. I was bewildered. To account for my behavior, all I had were two intangible yet undeniable convictions: something was missing; I wasn’t ready to settle down. * * *

The decision to end a stable relationship for abstract rather than concrete reasons (“something was missing”), I see now, is in keeping with a post-Boomer ideology that values emotional fulfillment above all else. And the elevation of independence over coupling (“I wasn’t ready to settle down”) is a second-wave feminist idea I’d acquired from my mother, who had embraced it, in part, I suspect, to correct for her own choices. * * *

In 1969, when my 25-year-old mother, a college-educated high-school teacher, married a handsome lawyer-to-be, most women her age were doing more or less the same thing. By the time she was in her mid-30s, she was raising two small children and struggling to find a satisfying career. She’d never had sex with anyone but my father. * * * What my mother could envision was a future in which I made my own choices. I don’t think either of us could have predicted what happens when you multiply that sense of agency by an entire generation.

But what transpired next lay well beyond the powers of everybody’s imagination: as women have climbed ever higher, men have been falling behind. We’ve arrived at the top of the staircase, finally ready to start our lives, only to discover a cavernous room at the tail end of a party, most of the men gone already, some having never shown up—and those who remain are leering by the cheese table, or are, you know, the ones you don’t want to go out with.

In other parts of the story, she praises women’s independence, reproductive technology and all-female support networks.  It’s hard to know what to make of Bolick’s article. In an interview at The Hairpin (here), Bolick asks, “Should I talk way up at the start about how mine is NOT a story saying there are no good men left? I’m terrified of people reading it that way — when in fact the reality, as I see it, is much more subtle and complex. Statistics are indeed showing that more men are struggling now than in the past, which is a result of vast economic forces, as well as social ones…,” with a nod to the work of Christina Hoff Sommers (see here).

Any thoughts?  What is the point of Bolick’s article?

This entry was posted in Feminism and Culture, Feminism and Families, Sex and Sexuality, Socioeconomic Class. Bookmark the permalink.

2 Responses to Is it Feminism “Fault” that Women are Single?