Dolls No Longer On The Market

One of the most controversial dolls in 1975, just about every newspaper in the U.S.A. carried a story about her, some women’s groups & a few parents wrote to complain, but with sales expected at 1 1/2 million, the doll must go on to market.   She’s 9″ tall, long platinum or reddish blonde hair, curled end flip. “She’s Two dolls in One,” when you turn the left arm she grows a modest bust line, slimmer waist and becomes 3/4″ taller. (turning the arm back again reverts to the previous shape doll).   Included are a red headband, red body suit, blue collar, blue scarf, red socks, red flats, white platform shoes, two red, white plaid skirts, one short, one long. 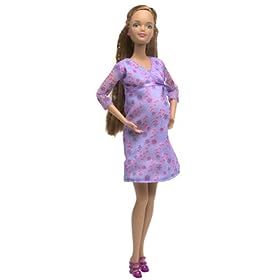 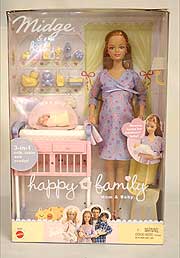 The pregnant version of Midge, which pops out a curled-up baby when her belly is opened : has been pulled from Wal-Mart shelves across the country following complaints from customers, a company spokeswoman said Tuesday.

“It was just that customers had a concern about having a pregnant doll,” Wal-Mart spokeswoman Cynthia Illick said. [Ed: linked article from 12.24.2002]

0 Responses to Dolls No Longer On The Market