Sexting and the Magdalene Factor

The news in recent weeks has reported a spate of child-porn prosecutions against teens accused of”sexting”:sending nude or semi-nude pictures of themselves to friends and classmates:typically using their cell phones. According to a study by the National Campaign to Prevent Teen and Unplanned Pregnancy, nearly as many boys as girls have sent or posted nude or semi-nude pictures or video self-portraits (18% vs. 22%). Yet, it seems that almost all of the prosecutions one hears about involve pictures of girls. Boys are sometimes prosecuted for possessing or”distribution,”but of those who photograph themselves, it is the girls that are the primary targets of legal action, press reports and public attention.

The expression by females of their sexual natures and interests has long been the object of particular anxiety in Western society. The general tendency is to expect, condone and even, in some circles, to encourage sexual interest and activity among boys. And, no one is particularly surprised or shocked to hear of the sexual pursuits or antics of men. Nothing is perceived as unnatural about the many wives or mistresses of Henry VIII and other English kings, or about the fact that a recent president of France had a secret second family on the side. But Henry’s daughter, Elizabeth I, had to be the”Virgin Queen,”at least in the eye of the public. And even the French were a bit scandalized by the fact that their female presidential candidate, Segolene Royal, was never quite married to her live-in boyfriend and the father of their 4 children.

Not to belabor the obvious, this difference is very deeply rooted. Nearly 2000 years ago the early church fathers decided to portray Mary Magdalene as a woman of loose morals and then to stress how amazing it was that the Prince of Grace even had anything to do with her. Even at that, she had to”repent.”As distressing as anything about this tale is the fact that she was almost certainly not a prostitute, and that the whole thing was trumped up to make an allegorical point about (at least in part)”fallen women”and dealing with the essence of sin. Even though most of the trappings of this form of”Christianity”have been stripped away from the de facto world-view in the West, its sexual dogmas:especially those concerning the sexuality of women:remain among our most cherished beliefs. To not repress female expressions of sexuality is still a secular sin. 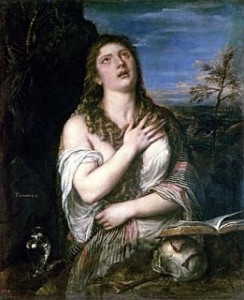 concerned to take stern remedial action at the first sign of a”fall.”Why do we hammer down on teen-age girls who, though perhaps not yet worldly wise, probably know what they want about as well as most people? Launching prosecutions for crimes that can bring a decade or more of imprisonment, and decades after that of sex-offender registration, residency restrictions and other miscellaneous hounding by government is no minor thing. It is certainly no way for a nation to treat its children.

1 Response to Sexting and the Magdalene Factor