Posted on February 24, 2011 by Bridget Crawford 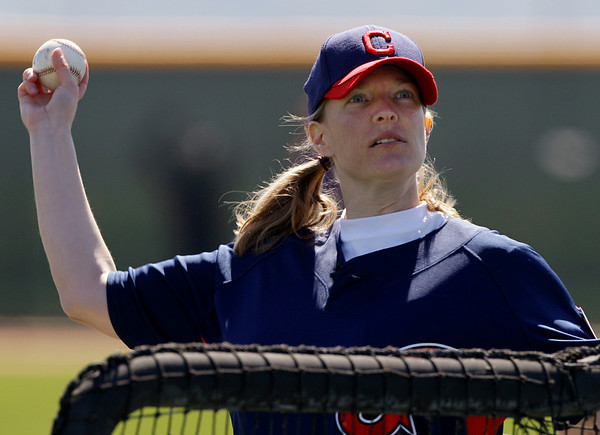 Justine Siegal felt a chill of excitement when she saw her dark blue Cleveland Indians jersey. She changed in the umpires’ locker room and emerged with a confident gait, her blond pigtails shining in the Arizona morning sun. Siegal, 36, smiled as she prepared for her debut Monday, her 13-year-old daughter, Jasmine, following close by her side.

A longtime advocate for girls playing baseball, Siegal explained her fantasy campaign. “I had a dream and felt like giving it a go,” she said. “I see this as more of a mental exercise than a physical one.” * * *

“It was wonderful to have her pitch for us because she’s from Cleveland,” Acta said. “I believe her dad and grandfather still have season tickets. It’s multigenerational. For her to do this with our ball club was very special.”

Raised in Cleveland, where she began playing baseball at 5, a young Siegal would lie in bed at night dreaming of a career in professional baseball, and of one day taking the field as a member of the Indians.

Her quest to throw batting practice began last November when she sent written requests to general managers of major league clubs. Only one bothered to answer. “It was a lovely letter supporting me, but also saying no,” Siegal said.

She didn’t stop there. In December, Siegal traveled to the winter meetings in Florida and tracked down general managers to make her pitch in person. * * *

On Monday, watching her mother throw four-seam fastballs to the hitters, Jasmine Siegal said: “This is so cool. She’s showing that no matter what, you can achieve your goals.”

On the sleeve of Justine Siegal’s Indians jersey was a memorial patch in tribute to 9-year-old Christina Taylor Green, the youngest person killed in the Jan. 8 mass shooting in Tucson. Green, a granddaughter of the longtime baseball executive Dallas Green, had been the only girl on her Little League team.

“This is a small way to honor her memory,” Siegal said. “She represents why I’m doing this. Christina is a symbol of all those girls who want to play baseball.”

About 13 years ago, Siegal started what is now called Baseball for All, an organization that promotes baseball globally, with the focus on female participation. The organization started as a four-team all-women’s baseball league in Cleveland.

To all the girls playing in Little Leagues across the country, keep pitching!

1 Response to Batter Up! Justine Siegal Throws Four-Seam Fast Balls in Batting Practice for the Indians