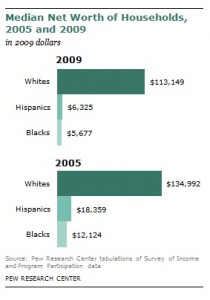 These lopsided wealth ratios are the largest since the government began publishing such data a quarter century ago and roughly twice the size of the ratios that had prevailed between these three groups for the two decades prior to the Great Recession that ended in 2009.

The Washington Post has coverage here.  Image from the Pew Research Center here.