Is Access to Affordable Menstrual Products a “Right”? Men and Women Disagree. But Men are Curious About Robots.

This week Eleanor Goldberg, a reporter at the Huffington Post, published an article, “Lots Of Men Still Don’t See Tampons As A Basic Right.” Here is an excerpt:

In a YouGov survey of more than 2,000 American adults released this week, just 46 percent of men said they agreed that having access to affordable tampons and pads should be categorized as a right, not a privilege. Of the women surveyed, 65 percent said it should be considered a right.

Meanwhile, 33 percent of men and 24 percent of women surveyed said they disagreed that it was a right, with the rest unsure or opting not to say.

More advocates are working to convince lawmakers to make tampons and pads less expensive and more readily available in public restrooms. The goal is to ensure that women and girls of menstruating age don’t miss out on school and work opportunities or have their dignity compromised just because they can’t afford a tampon.

While research hasn’t determined the precise number of women and girls who can’t afford tampons or pads in the U.S., surveys suggest it’s a widespread issue affecting various low-income communities. The YouGov report found that almost 40 percent of women surveyed have been in a situation more than once where they didn’t have a tamponor pad when they needed it. 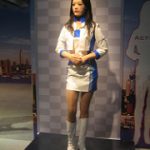 You can read the full article here.  The YouGov survey is here.

BTW, an earlier YouGov survey revealed that 49% of all Americans predicted that sexual intercourse with robots will become a common practice within the next 50 years. One in four men would currently consider having sex with a robot. My guess is that robots won’t be programmed to menstruate.

This entry was posted in Feminism and Economics, Feminism and Technology, Sex and Sexuality, Women's Health. Bookmark the permalink.