Talking with High School Students about the #Tampon Tax

Posted on February 28, 2020 by Bridget Crawford 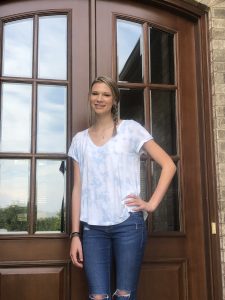 Logan Kenny is a high school sophomore attending USC Upstate through the Scholar’s Academy program located in South Carolina.  She is currently working on a research paper about the tax on feminine-hygiene products in the US. She recently contacted Professor Crawford with some questions about the tampon tax. The results of their written interview appear below.

Logan Kenny: Who benefits from the tax and what is done with the money collected from the tax?

Bridget Crawford: The most immediate benefit is to the states that impose a sales tax on menstrual products. Sales tax is a much more important source of revenue than, say, the income tax in most states.  So in general, the sales tax is a big part of any state’s budget.  That being said, the sales tax on revenue from menstrual products is truly a small percentage of the budget. In California, for example, revenue from the tampon tax was just 0.011% of the state’s budget for 2018-2019.

Logan Kenny: Is the tax a violation against human rights? Why?

Bridget Crawford: My colleague Carla Spivack (Oklahoma City University School of Law) and I have argued (here) that the tax on menstrual products deeply implicates the right to be free from discrimination, the right to health, and the right to education, to give just three examples. The Colombian Constitutional Court ruled in 2018 that the tampon tax violates women’s sexual and reproductive rights, as well as rights to dignity and autonomy.  The same court affirmed that the City of Bogotá must provide pads for homeless women.  Failing to do so, the court reasoned, violates human rights.  In Europe, there have not yet been any cases that have come before the European Court of Human Rights or the European Court of Justice, but both courts have recognized that taxation is a human rights issue, so I wouldn’t be surprised if we saw some cases in the future.

Logan Kenny: Why is it important for the tax to be eliminated?

Bridget Crawford: Stephanie Arnold and Sharron Champion, founders of The Homeless Period Project in Greenville, South Carolina, are doing such good work on this issue. They saw in their own community, through their volunteer work with schools and churches, that too many women and girls didn’t have access to the basic products they need. They saw that too many people were choosing between feeding themselves and their families, or buying menstrual products. That’s a choice that no one should have to make. Removing the tax from menstrual products is just one small step in the direction of making menstrual products more affordable. If we want all people to have the opportunity to participate as equals in all aspects of public life, they must be able to meet their involuntary biological needs.

Logan Kenny: Feminine products have a tax while, in some states, male specific products such as erectile dysfunction medication do not. Why do you think this is?

Bridget Crawford: Generally speaking, all items are subject to sales tax unless they are specifically made exempt. Most states have exemptions for items that are considered to be necessities.  Medications, such as Viagra, are commonly considered necessities. I don’t think there has been some grand conspiracy to tax women specifically. Rather, it is the failure to exempt menstrual products — an inaction — that is the problem. My colleague and co-author Emily Gold Waldman and I (here) have attributed the failure to exempt these products from a general squeamishness about talking openly about menstrual products and women’s bodily functions. And if lawmakers do not talk about the biological need for these products, then menstrual products will never make it onto the list of exempt items.

Logan Kenny: Some people argue that eliminating the tax would raise the tax on other items. Is this an acceptable argument and why/why not?

Bridget Crawford: Simply put, states should repeal the tampon tax because the tax is unconstitutional. Legally speaking, it’s no defense to an unconstitutional law to say, “We have to keep discriminating because non-discrimination is expensive.” Practically speaking, if a state does the right thing and eliminates the sales tax on menstrual products, there is zero evidence that other taxes will increase. States like New York and Florida, to name just two, eliminated their tampon taxes without increasing other taxes.

Logan Kenny: What are other misconceptions that people may have about eliminating the tax? Why are they not credible?

Bridget Crawford: I was surprised to read (here) that one Virginia lawmaker objected to including menstrual products in the state’s annual three-day sales tax holiday, for fear that women would “abuse” the privilege. And there is the high school principal (here) who initially turned down students’ request for free menstrual products in school bathrooms, on the grounds that the girls would “abuse the privilege.” These men seem to fundamentally misunderstand both menstruation and women.  Menstruation is an involuntary biological process. Girls and women aren’t out to profit from their periods, gobbling up resources for the sake of it. Would that lawmaker say the same thing about toilet paper? Does the high school principal worry that students widely and systematically abuse the availability of hand towels in the bathroom? I doubt it.  Their comments are outright sexist.

Logan Kenny: What is needed by state legislation in order to eliminate the tax?

Bridget Crawford: The legislative solution is very simple, and I am willing to work on a pro bono basis with any state legislature that wants to repeal its tax.  Simply add menstrual products to the list of tax-exempt items! Professor Elizabeth Cooper and her students in the Legislative and Policy Advocacy Clinic at Fordham Law School, together with the nonprofit Period Equity, have put together a fantastic set of advocacy materials (here) that citizens can use to advocate for repeal in their state.

Logan Kenny: Why is that the majority of women use tampons/pads, yet they are not deemed a necessity to be taxed exempt? What qualifies an item to be tax exempt?

Bridget Crawford: Tax exemptions is a matter of legislative grace. In other words, lawmakers have to declare that a particular category of goods is tax-exempt. Medical supplies, for example, are typically tax-exempt. But conceptually, we know that menstrual products are not “medical supplies,” like bandages or gauze, in the sense that we don’t use them because we are hurt or ill. We use them because we have female biology. But there is no reason to have to shoehorn menstrual products into existing categories of tax-exempt items. The state legislature can declare them to be tax-exempt. This is easy, from a practical perspective. More importantly, it is required by our nation’s Constitution.

Logan Kenny: Were feminine hygiene products always taxed? If not, when were they imposed?

Bridget Crawford: State sales tax has not been a long-time feature of the U.S. system. Scholars debate about which state first adopted a modern sales tax as we know it, but the state sales appears to originate in the 1920s. Vermont didn’t adopt a sales tax until 1969! So the state sales tax is relatively “young” as taxes go. Other taxes have been around since colonial times. The federal estate tax, by way of comparison, was instituted in 1916.

Logan Kenny: What do you think the economy would look like if the tax was eliminated vs keeping the tax?

Bridget Crawford: Making menstrual products more affordable can have a huge positive impact on the economy. If schools, work, and public life were designed with women in mind, we’d have the full potential participation of our entire population.

Logan Kenny: How many girls/women can’t afford these products as of right now? What do they have to resort to?

Bridget Crawford: Nationwide, over half of all public school students qualify for free or low-cost lunch. In cities like New York, for example, and in Miami-Dade County in Florida, that percentage is over 70%. To talk about just the student population, if a student cannot afford menstrual products and the school does not provide them, many students will feel like they need to miss school. Professor Christopher Cotropia at the University of Richmond has documented (here) that missing school, coming late to school, or leaving school early is correlated to the inability to afford menstrual products. This is an absolute educational and economic tragedy that must be addressed. It is a stark deprivation of the rights of all students to equal access to education. My co-authors Emily Waldman and Margaret Johnson and I explain in our article Title IX and Menstruation, forthcoming in the Harvard Journal of Law & Gender, that schools’ failure to provide menstruating students with easily accessible tampons and pads negatively affects students’ access to equal educational opportunities. We believe that Title IX should require schools to provide these products.

Conversations around the tampon tax make clear how much we need leaders of all ages in every community.  Young people grasp quite easily how important it is that girls and women have access to the products they need in order to be full and equal participants in all aspects of public life. And eliminating the tampon tax is a huge part of increasing access.  When we see that half of the population bears a financial burden because of their biology, the inequality is obvious. The tax law is an effective prism that allows us to quantify unfairness in dollars and cents.