Via I Blame the Patriarchy, I found the blog Suicide Food, which tracks “depiction[s] of animals that act as though they wish to be consumed.” Images like this: 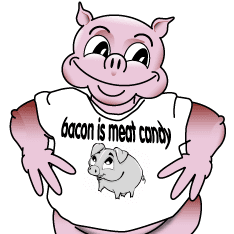 That second one makes me think about terminating the “baconpheffer” category here. It was always meant ironically, since I am a vegetarian, but at the moment I’m not remembering why I thought featuring baconphernelia here was funny.

Primo stuff! Smiling cartoon pigs throw themselves onto flames, anxious to become palate-pleasing morsels; beer-guzzling crawfish contentedly paddle a soup-pot down a river of broth with celery oars; libertine barnyard animals yuk it up pre-mortem in a full-blown debauch. And yes, blogger Ben addresses one of the most repellent TV commercials ever aired, the one where a couple of talking pigs, seated at a restaurant, tuck into an enormous plate of ham and toss off one-liners about enjoying the”flavors of a fallen friend.”

The parallels between the myth of the happy hooker and the myth of the self-sacrificing meat animal are legion. Both prostituted women and livestock are the creations of a culture of domination. Both are controlled by organized systems of oppression. Both are ostentatiously and gluttonously consumed by a privileged class. Once consumed, both are left to rot with last night’s garbage. Both represent the privileged class’s celebration of itself and its contempt for anything it happens to debase in the course of its daily pillages. And the myths about oppressed individuals choosing to serve the vulgar interests of their oppressors have been created to allow the dominant culture’s beneficiaries to sleep at night.

This entry was posted in Acts of Violence, Baconpheffer, Feminism and Culture. Bookmark the permalink.

2 Responses to Eat Me.